workshop description: 10am 40min presentation of their work and approaches

11am 2x45min hands on workshop, (how to amplifying objects and visual aspects of performance and installation art). 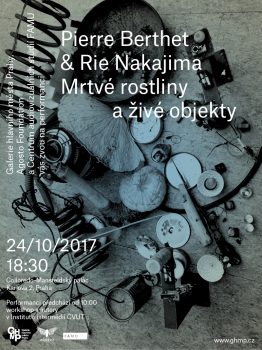 Rie Nakajima is a Japanese artist working with installations and performances that produce sound. Her works are most often composed in direct response to unique architectural spaces using a combination of kinetic devices and found objects. She has exhibited and performed widely both in the UK and overseas and has produced ‘Sculpture’ with David Toop since 2013. With Keiko Yamamoto she has a music project ‘O YAMA O’ which explores music with no genre. She also has a collaborative project ‘Dead Plants/Living Objects’ with Pierre Berthet.
http://www.rienakajima.com/

Pierre Berthet in Belgian sound artist, performer and musician. Since 2013 he performs occassionally with Rie under name „Dead Plants and Living Objects“. He studied percussion at Brussels Conservatory and spent a lot of times in a bell tower, learning carillon and listening to the sounds. Slowly he started to prolounge various objects and instruments with long steel wires connected to can resonators suspended in the space, probably influenced by the works of people like Alvin Lucier, Terry Fox, Paul Panhuysen...Learned a lot also by playing several years with Arnold Dreyblatt’s Orchestra of Exited Strings and also by dueting with Frederic Le Junter. Since the nineties he realize and exhibits indoor and outdoor sound and visual installations. Adapted to the place where they are exhibited, they are also materials for live performances. Around 2000, started to explore various ways of making music with inverted vacuum cleaners. In 2010, he started to perform a piece by Tom Johnson for 5 sounding pendulums Galileo. In 2012, he started to shake dead plants mechanically. Thanks to Rie Nakajima, he discovered the use of batteries so that the motors, free from cables not only shake the plants but move them sometimes in the space (auto-mobiles).