Make the most of your summer and participate in PULSEE, the Prague Performance Media summer school

With Bozkurt Karasu from MIT, Cambridge. 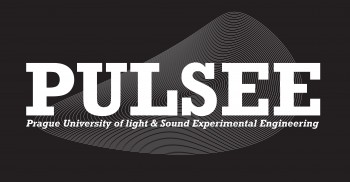 Isadora Licenses for the workshop were provided Courtesy of Mark Coniglio + TroikaTronix.

This course does not believe in positions and/or hierarchy in performing arts. It believes that every single member of an ensemble, regardless what their role might be—set designer, dresser, make-up artist, soundboard operator, stage manager or student—is a “performer”.

When the house opens, we all “perform” one way or another for the show we have been a part of throughout the whole creation process. And I don’t mean it like “performing in spirit,” I mean it literally. We all perform together with the actors on stage as a member of the ensemble.

Throughout our time together we will examine contemporary and historical techniques for media integration through readings, viewing of videos, movie screenings, essays, recorded moving images, live-feed video, noise and audio composition, performance based installation, lighting and web-based performance and anything else… Studio exercises, in class performances, individual and group projects and discussions will provide a forum for experimentation. The course is designed to engage art enthusiasts, designers, directors, choreographers, performers, visual artists, media engineers, programmers, etc., in the practice of integrating media into live art events and to encourage them to improvise, perform and experiment with their visions. We will learn together, experiment with dozens of different ideas, and feed each other with our own experiences. We will find our inspirations, learn how to appropriate them and carve our own way by brainstorming, discussing and rehearsing to achieve our final goal, which is a final performance in front of a live audience. It is a two weeks workshop, mostly lead by the students themselves, which highlights their individual characters and interests as the most important ingredient of their work…

The main lecturer of this year’s PULSEE was Bozkurt Karasu.

“Bozkurt “bozzy” Karasu began working on stage in 1991 in Istanbul, Turkey as a production crew member of the Istanbul Festivals organized by Istanbul Foundation for Culture and Arts… After working as a free-lancer production manager and designer there for 13 years he moved to NYC in 2003 to join The Wooster Group as a company member and later moved to MIT Theater Arts as a technical instructor in October 2012. Besides The Wooster Group he collaborated with and designed for a wide array of artists and ensembles within last decade such as Wesley Savick, Findlay//Sandsmark, Armitage Gone! Dance, Richard Maxwell and the New York City Players, The Watermill Center and Robert Wilson, Butch Morris (1947 – 2013), Mestre Joao Grande, Sarah Michelson, Bruce Odland, No Theater, Radiohole, The Collapsable Giraffe, American Repertory Theater, Dan Graham, Cynthia Hopkins and Jack Warren. Recent works include Technical Direction of the International Summer Program of The Watermill Center by Robert Wilson (July and August 2014); Lighting and Video Design for the “The Saint Plays” written by Erik Ehn, Directed by Wesley Savick (November 2014); Sound and Video Design for “Bride, Widow and Hag” written by Kim Rosenstock, directed by Shira Milikowsky (January 2015); Consulting in the construction of Performances Venues within Koc Contemporary Art Museum, Istanbul – Turkey (ongoing), Videography for Paddy Saul Band (ongoing) and Technical Supervision for Findlay // Sandsmark, Stavanger – Norway (ongoing).”

Jakub is an assistant lecturer of this year’s PULSEE.

Technical manager of IIM. Overseer of technical requirements for student and visiting events. Creative engineering, dealing with all sorts of matters including light design, hardware and audio.

Jakub Hybler is a lecturer at the Faculty of Electrical Engineering, Czech Technical University in Prague (FEE CTU). He is a member of the HandaGote Research and Development theater group. His collaborative work with companies and individual artists includes: Alfred ve dvoře, Divadlo Continuo, Krepsko, LightLab, MamaPapa, PQ. He has also collaborated on several dance and choreography projects which were developed at the Institute of Intermedia.

Berrak is a choreography supervisor of the workshop.

Berrak is an independent dancer, choreographer and dance teacher. She grew up and studied dance in Germany, Turkey, Saudi-Arabia, Russia and England before starting her professional career in Turkey and France. She created over 15 choreographies for her first company Kumpanya Bale Turk in Turkey.

She then moved to France as a freelance dancer and choreographer and collaborated with theater and dance companies and dance institutions. She toured to the Czech Republic in 2003 with one of her creations, where she fell in love and decided to move to Prague in 2005. She has worked as a dance technique teacher for the Duncan Centre Conservatory, as well as opened her own classes in Turkish Belly Dance and Improvisation.

In 2007 she co-founded the Performing Arts track of Istanbul Bilgi University in Turkey, where she still teaches improvisation and creative process courses. In the meantime she has created her own company (Limpid Works s.r.o.) and produced three recent pieces, exploring traditional Turkish dance with a contemporary twist.

Since the birth of her daughter in 2010 she has dedicated herself to dance improvisation, Turkish Belly Dance and her final love: Argentinian Tango. Together with Arneldo Rodríguez she has currently founded the dance courses Tango Now. She works as a dancer, choreographer, consultant and a dance teacher. For more information about her works visit www.berrakyedek.com

Hanka is responsible for the strategic development and international relations of IIM. Alongside that her focus is also on integrating IIM into the Czech creative industry and digital economy platforms.

Hanka did her Masters in Cultural Anthropology and Management but as she was always into dance and theater she went to England and studied Choreography and Devised Theatre at Dartington College of Arts. Upon her return to the homeland she did various kinds of jobs, enjoyed being a high school teacher as well as a social carer. She is the co-founder of ImproEvents Prague, an annual festival of dance and theater improvisation.

Director of IIM. He founded the Institute in 2007 together with Miloš Vojtěchovský. Roman writes projects for IIM and teaches Multimedia and Computer Animation Technologies at Czech Technical University. Roman is also an assistant professor at the Department of Computer Graphics and Interaction. His work focuses on computer animation, virtual reality and multimedia, and motion tracking.

Kateřina is responsible for supporting public relations and marketing activities as well as organising events, performances and workshops. She was first a dancer and studied dance pedagogy. Then she fell in love with movies so went and did her Masters in film production. Then, quite understandably, Katka fell in love with IIM and here she is.